Petrus has explained his birthday hunt which was an absolute pleasure and a honor as well. I also had the opportunity to guide my father – the man that taught me to hunt – on a buffalo hunt which really made it something to remember.

As in the industry of guiding safaris, we had not been home for, 2 days to be exact when, I was wisped away on LAM airlines and our final destination Inhasorro in Mozambique.

The flight out of OR Tambo was 40 minutes to Maputo where we spent 2hrs, then another 1hrs on layby and we landed in Vilankulos where our vehicle sent from South Africa with our boat was waiting for us.

As was expected but still surprises you, when you open the doors on the runway and that dry African heat takes your breath away it is hot, very hot and away form the sea side or beach the wind is not at consistent. The adventure is now and you move through customs passport control and collect your luggage as fast as you can get in the vehicle and the ice-cold face cloth that awaits you along with and even colder 2m beer (local Mozambique beer) is exactly what you need.

The drive from Vilankulos to Inhasorro is approximately 1 hour and when you arrive ad Dugong Lodge (http://dugongmozambique.com/) you met by the hosts Martin and Karen. It is truly as if you have just moved house, you are made to feel right at home settled into you chalet along with air-conditioning and roof fans and in full view of where all the fishing is going to be done. 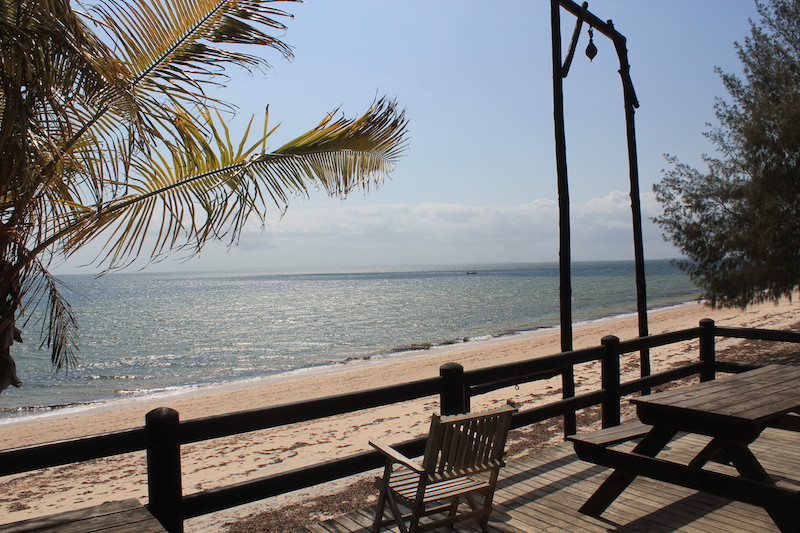 No time is wasted on and the game plan is set for the next morning. We had all our meal packed by the staff breakfast boat lunch and dinner and they were out standing prepared by the chef at the lodge kitchen. The bar is on the deck over the beach and looking directly onto Bazaruto island where 3 we were to do battles with giants. 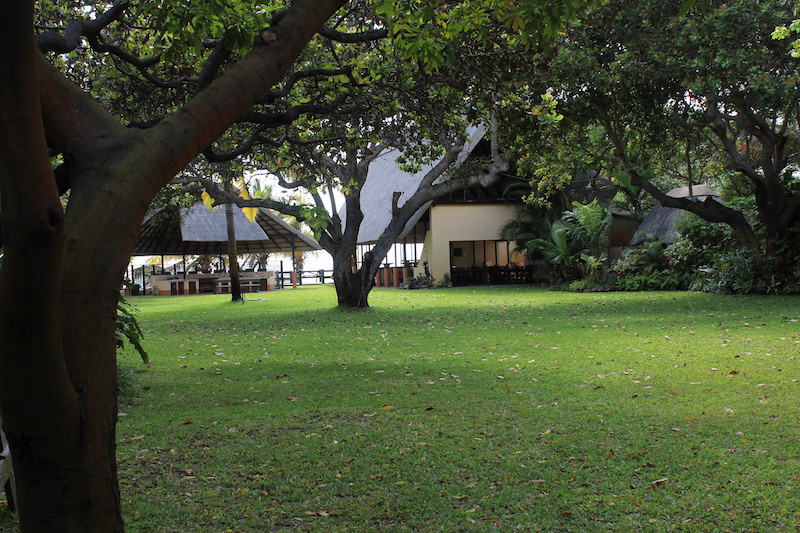 A very good friend that has since passed was passionate about the marlin around the island he had seen and hook 8 exceptionally big black marlin of which he managed to load the smallest the weight was 590KG (1300lbs) which still stand today as the 130lbs all African record as of my last reading. Johnny Harel originally from Zimbabwe was asked to leave and moved to Inhasorro and avid hunter and fishermen I learned much of what I know about the island from him.

Armed with all of this and the hope of big fish we were ready.

With all the preparation done at home in Johannesburg we needed to just launch the boat the next morning done by the tractor from the lodge and we were heading for the island at 6am.

We made the north point and the sand spits and had our first 3 rods in the water by 7am and the first lure was taken by 7:30. A nice tuna that was immediately eaten by a shark. 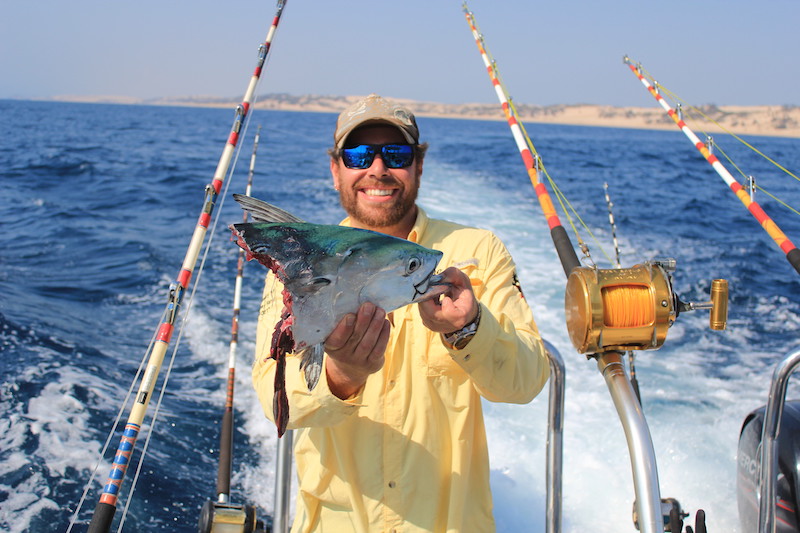 We kept it up and soon had 2 great baits in the live well. A Yellow fin tuna of 15kg and a kawa kawa of about 12kg.

We then turned and headed for deeper water and as soon as we cleared the 200meter mark I rigged the tuna and turned them to swim. We finally got all the way to the 450meter mark and had not been touched yet but there were some tense moments. We were still discussing the fact that the bait had lasted so long when the first Hammerhead arrived a giant amongst a species of giants. He was around 5 -6 meters long with a dorsal fin as long as my leg he inhaled the first bait while we tried to get them out the water we managed to salvage the second but after a short run with the boat to clear this massive shark we put him back and was treated to a spectacular shark take again about 2min later. 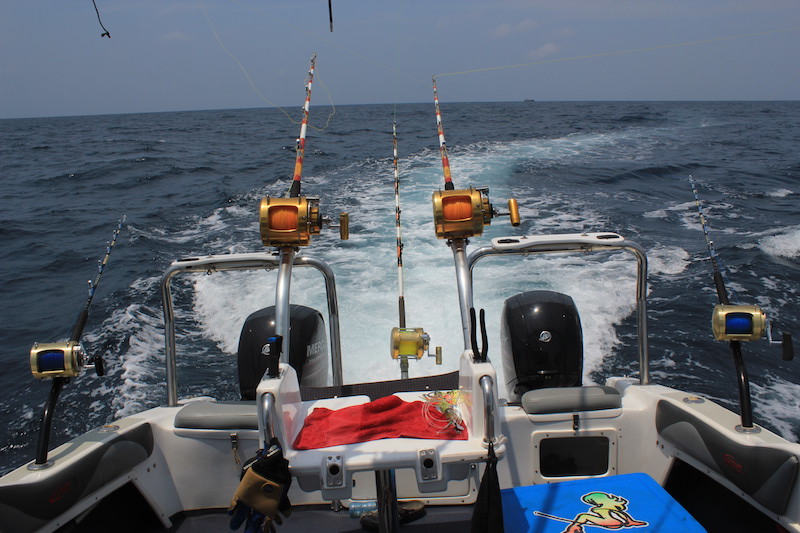 So no baits the day has 3 hour left in it out cam the Konas and we started the trolling bearing in mind we are just 2 people on the boat it was quite a job to get everything in place and perfect. We called lines up at 4pm and met with the other charter boat at the sand spits know as the sand bar. We all enjoyed the days story as they got a fish of around 50kg and released it and the hunter that caught it shot his first Buffalo and caught his first billfish on the same trip. After heading back home we shared and evening on the patio under the African stars.

Day 2 was just as early and we where at the island at 7am. We were pulling the live bait lures by 7:30 it was a bit slower this morning but I managed to find us some bait the 3 rods we had in all took off and all cam off except for one which was bending Mitch and making him work for the tune after about 15min a shark took our live bait and our lure which left us highly un impressed. We set up again and turned and looked for live bait but to no avail.

I rigged the drop shot sticks and we cleared the deck pulled up to a good showing on our fish finder dropped the lures and where immediately picked up by the tuna of around 12-15kg which at the same time stripped both the rods of all their braid and I think the sharks helped them though.

It was now 10am and time to change the game plan. We select our best spread and put the Konas back in the water we started working all our favorite spots.

Our first fish arrived at 2pm and hit the long right rigger a blue and white Bonito Smoker made by Pulsator lures. The boat struck the fish and we cleared the deck of all the rods and apparel. Mitch got into the fighting chair and started the tedious job of retrieving the line that was in the water approximately 450meters out. 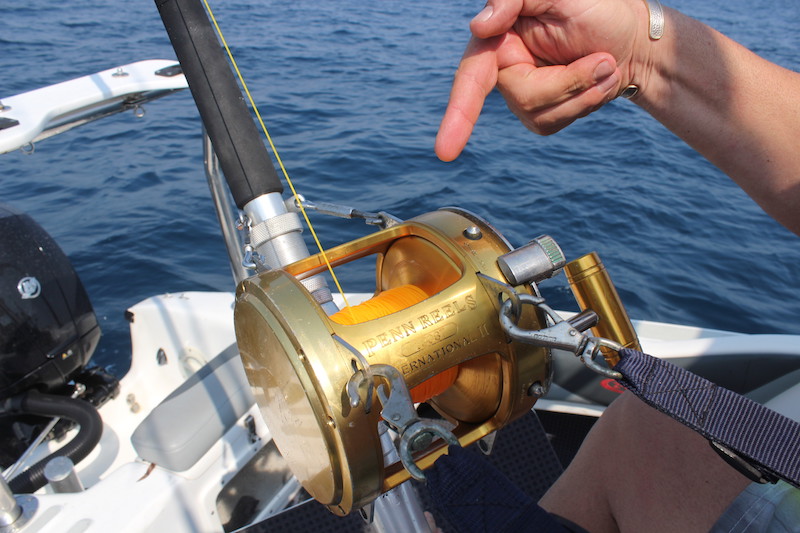 After a outstanding display of jumping and about an hour later the fish was next to the boat the hook extracted and we revived the fish took a few photos and set him free again I estimate the size of the fish to be around 250Kg’s or 500lbs. 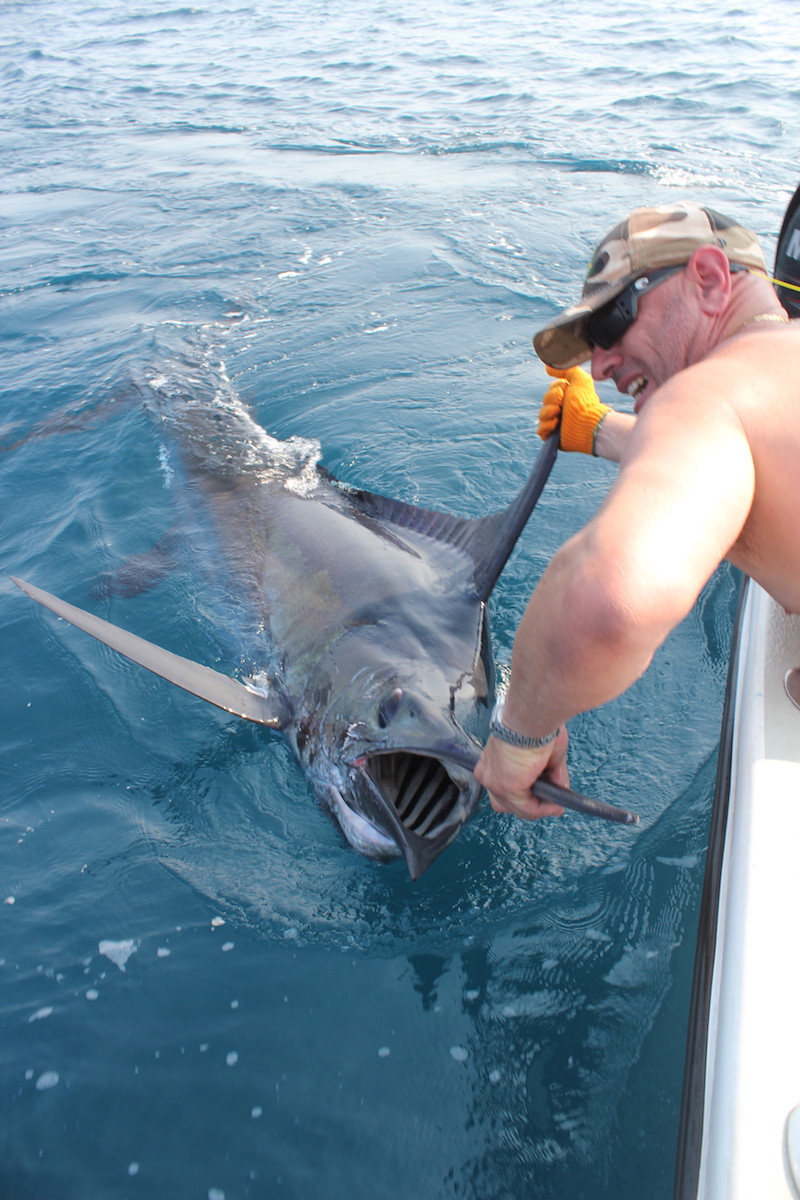 We put the lures out headed back to the sand spit and met the other clients there for a beer and to hear the stories surrounding the days fishing. That evening we were very tired but managed a slight celebration of the 500 pounder. 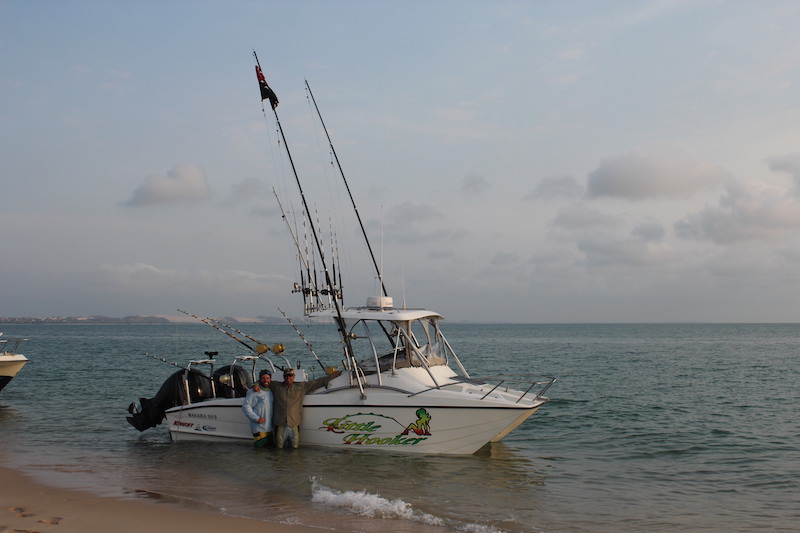 Day 3 and the last day before the weather changed we took much longer to get to the point as the sea was much rougher closer to the Island and when we got out beyond the rough water we could see the weather starting to change so we put the Konas in the water and worked out to the 600m mark witch is about 12km past the island but we kept finding much more life on the 300m mark the same line on which we got the fish the day before.

We worked in and out of the lighthouse and as I could feel the wind picking up I moved us towards sailfish bay and headed deep. There again I changed the tack and placed us with the following sea on a heading for the area we hooked the fish the day before. Just before the lighthouse the inside right (short right or flat right) rod was smashed by a marlin as I saw him we hit him with the boat and started to clear the deck which was completed much easier this time.

I took the rod got into the char and clipped in he gave us a great show on the surface jumping and shaking his head after about 30min we had him next to the boat unhooked him took few photos and revived him and turned him free second marlin in 3 days fishing not bad as the weather was turning but the minute we turned to head home at 3 pm and were greeted with big smiles and a 40knot South East wind that evening which ended our last days fishing. 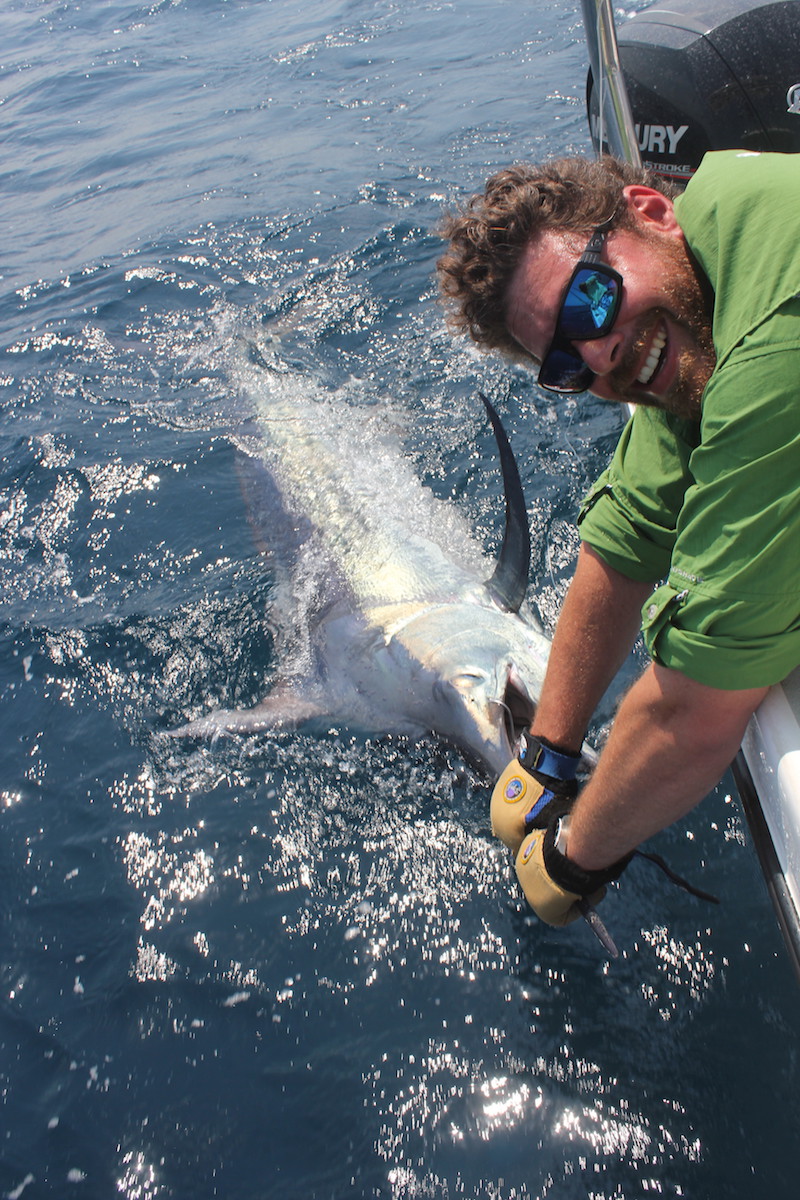 We spent our last day on the beach and visiting old friends and lodges. After which we all watched the Bokke beat the Welsh in the rugby world cup 2015. Our flight left on Sunday and we were back in JHB at 4:30 pm and that was an absolute pleasure beats the drive every time.

Next up I have a buffalo hunt on the cards and looking forward to some time in the bush.