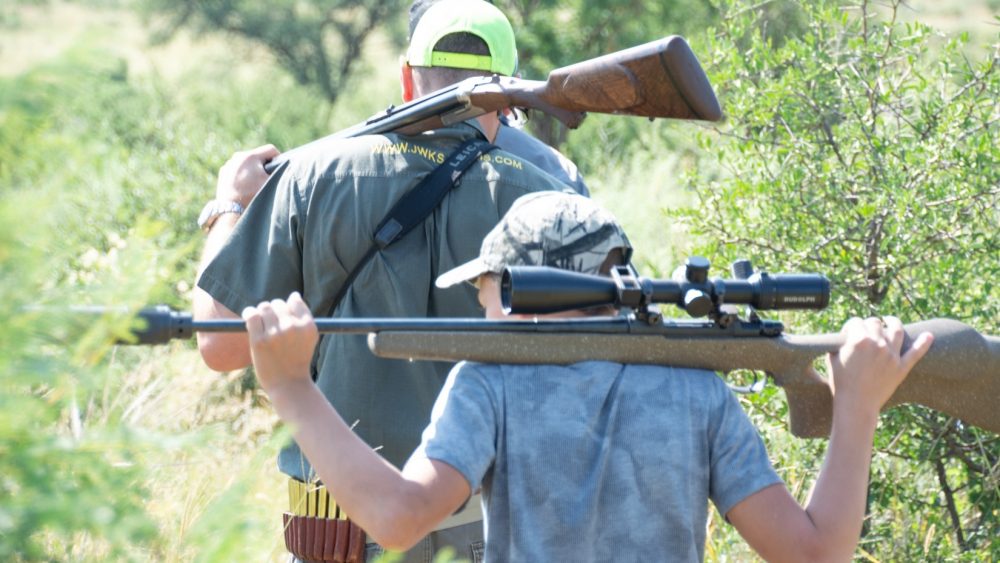 I had the privilege of guiding Caleb Dos Santos on his first Hunt.

At 13 years young he is one of the most competent hunters i have guided.

This is what he had to say

“My name is Caleb and I will soon be 13 years old. My interest in hunting started in 2017 after a family weekend away on a friend’s game farm in Limpopo province. It was there that I was first allowed to shoot a ‘break-neck’ pellet gun and observe antelope species. I am also lucky to visit my grandparents at their holiday-house in Marloth Park and have many opportunities to visit the Kruger Park where I enjoy spotting and photographing a variety of game. After that first visit to a game farm I asked my father about getting me a pellet gun, but he said that we should rather wait to do our ‘homework’ as he knew nothing about guns and we also had to ask the government (my mother) for permission. Later that year I got my first rifle – a gas-piston pellet gun and I started to practice shooting targets in my backyard. My father also organized a dove hunt on a farm outside Bethal and on my first outing I shot 8. The only rule that my father has when it comes to animals I shoot is that we eat them – except for vermin. A few months later we started to talk about getting a better air-rifle so we watched many YouTube videos to understand what we needed. I finally chose a PCP air-rifle in a .22 caliber and my father suggested that I join the local air-rifle club to develop my rifle handling skills and safety. With that rifle I have gone on many bird hunts which have included Guinea-fowl, francolin, yellow-billed ducks and Egyptian geese. My mother only likes the rifle because I shoot all the rats, feral pigeons and mynah birds in our yard. But I still wanted to hunt an antelope.

In 2018 my father took me to a game farm in Ficksburg to see what a hunting operation was all about, it was really a memorable visit. I also collected books and magazines on the topic of hunting which helped me to learn more before the actual day came (I actually think my dad tricked me to read more). In that same year my father came to hear about Jono Joseph and JWK Safaris from a close friend. After my dad spoke to Jono about the possibility of me hunting my first antelope a proposed hunt was roughly planned. Early this year the plans were finalized and we were off to Jono’s hunting farm outside Potchefstroom for my first antelope hunt. When we arrived we met Jono at the farm gate with his two dogs which are his trusted hunting companions. We also met Samson who was Jono’s right hand man in the field. We were soon on the range where I got instruction and sighted-in the rifle I was going to use. I had a good laugh when Jono allowed my dad to shoot one of his big rifles that almost knocked him over and shot right out of his hands. The rifle I used was a Remington 223 caliber which was much heavier and longer than what I expected, but Jono made me feel comfortable in my shooting ability. Later that afternoon we drove around the farm to get me used to handling the rifle in the field and Jono gave me the opportunity to shoot a jackal – sadly no luck.

The next morning we were off to hunt what was to be my first impala. We tracked a number of impalas during the morning session and had a few opportunities to shoot but they were either not mature or they gave us the slip. As the morning progressed so did it get hotter and the impalas seemed to have vanished into thin air or rather thick bush. Next time I see impala I will remember that it wasn’t as easy as I thought to hunt them. I did enjoy the bush scenery together with the sightings of other antelope like kudu, nyala, Zebra and off coarse Buffalo. By midday Jono suggested we take a break and discuss our options. The plan was changed for the afternoon session to focus on Blesbuck and with that we moved on to another area that was flat and more open. As we came down a long sandy track we spotted a large herd in the distance and Jono told us to get off the vehicle as the wind was just right for stalking the Blesbuck. We ran to the first bush to get a better view of the herd and spotted a beautiful mature ram. I was put in position to take the shot but the Blesbuck did not present an ideal angle for me to shoot and then ran off to the right of where we stood. We again quickly ran to the bush on our right where I could see the same ram in the distance. I set up once again for the shot and waited for the ram to turn. The ram was facing away and only presented a quartering shot, but Jono felt that I could make it as it was within a 100 meters.  Jono gave me the go-ahead and I did not hesitate to take the shot. The shot rang out with a follow-up thud as the bullet hit and the dogs were off after the Blesbuck while the rest of the herd ran-off in panic. My heart was racing as we made for the general direction of where the Blesbuck last stood. Jono pointed to a feint blood splatter on the ground and said it was arterial blood which was a good sign. Soon one of his dogs barked while we sprinted to a small bush where the beautiful ram with his fantastic horns lay in front of me. I was happy but also thankful that the shot was well-taken and the beautiful ram had died quickly. The expert team of hunters that helped me get my first antelope posed with the Blesbuck for photographs. Jono painted my face in fresh blood to mark my first successful game hunt. I will treasure this moment for time to come and would like to thank PH Jono Joseph from JWK Safaris for allowing me this special moment in my young hunting life. I have learnt much from this experience and would recommend Jono and his team to any young hunter wanting to bag their first animal.”

You can see the clip made by Caleb